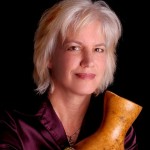 Michaelle Goerlitz has been playing drums and percussion since she was eight years old. After attending college in the Midwest, she moved to San Francisco in 1980 to continue her studies, which have led to exploration of Brazilian, Afro Cuban, Venezuelan, and Middle Eastern rhythms (plus American idioms jazz, R & B & funk). She was a founding member of two renowned & long-term projects, the Blazing Redheads and Wild Mango. Both groups blended many different styles which showcased Michaelle’s versatile percussive skills. Among the list of people Michaelle has played with: VNote Ensemble, Venezuelan Music Project,Chelle & Friends, Wayne Wallace, Mark Levine, The Brazilian Jazz Project, Ojala,  rhiannon, Barbara Higbie, Jami Sieber and Samba Rio.