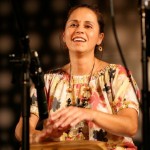 A native of Maracaibo, Venezuela, Lali Mejia started her musical training at an early age at the Colegio Bellas Artes in Maracaibo. As a 5th grader, she was taught how to read music and play the recorder, advancing into Cuatro studies and the school’s choir during early high school. At the age of 12 she began classical guitar lessons for several years before moving to the United States to pursue her BFA degree in Graphic Design.

Lali formally began her percussion studies under Jackeline Rago, Venezuelan instrumentalist and percussionist based in the Bay Area. She also furthered her studies traveling to Venezuela and taking specialized courses in Afro-Venezuelan percussion with master percussionist Alexander Livinalli and members from the Fundacion Biggott. Additionally, Lali studied the art of cajon flamenco in Barcelona, Spain, under Alberto Perez, flamenco singer and percussionist, with an interest in applying its technique to contemporary Latin American music.

Since 2004, Lali has helped facilitate many Afro-Venezuelan workshops around the United States and internationally. She is a guest instructor at the “Born to Drum” camp in Northern California as well as the Jazzschool, in Berkeley, CA.