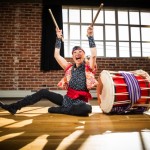 Janet has recently returned from mounting a new work for Odaiko New England and showcasing at the APAP conference in New York.

See the Rhythmix web site for more information about Janet and her current projects.