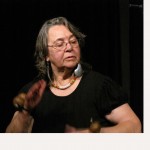 Jackie acted as consultant to the organizing group and worked on the website.  She co-produced Born to Drum for 7 years.  Jackie  is co-founder of  Women Drummers International, where she has served on the Board since its inception in February 2008.  She has produced Drum Sundays since the fall of 2009, opening with our first event on January 10. 2010,  working with numerous other volunteers.  Jackie studies Congolese and Afro-Cuban music and has been playing drums since 2001.  She is a political activist, a feminist, and an organizer.